Anthropologist archeological digs have shown that Hopewell Indians (Nephites) made their own woven cloth. The mention of silk in the Book of Mormon probably has to do with the thinness of the fiber strands versus silk fiber produced by mulberry silkworms.

13 Behold their women did toil and spin, and did make all manner of cloth, of fine-twined linen and cloth of every kind, to clothe their nakedness.

Alma 1:29
...and abundance of silk and fine-twined linen, and all manner of good homely cloth.

"Some of the textiles or fabric created by Hopewell weavers is as delicate and fine as linen or silk. What they have found so far comes from local plant fibers and is made using a "twining" technique. This technique is ancient and involves no loom, only the use of cordage or twine, dyes and a simple frame. "
https://www.brighthubeducation.com/middle-school-social-studies-lessons/67881-teaching-students-about-the-hopewell-native-american-culture/


Below is an artifact of Hopewell/Nephite cloth: 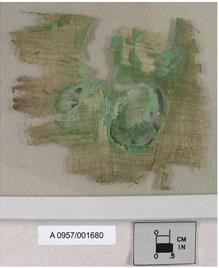 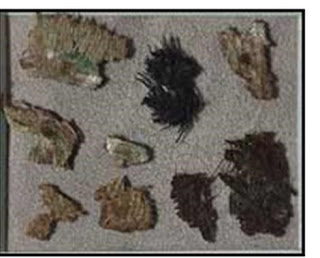 
Hopewell Indian use of woven cloth matches the Book of Mormon description of Nephites wearing woven clothing and in some instances it being described as a status symbol.

24 And now, in this two hundred and first year there began to be among them those who were lifted up in pride, such as the wearing of costly apparel, and all manner of fine pearls, and of the fine things of the world.

“Skeleton 248 had been dressed in a skirt of finely woven cloth extending from the waist to the knees, to which had been sewn pearls, bears-teeth, and other ornaments.”
(Moorehead 1922 pg. 169)

“Unarguable Mississippian period representations of garments do exist, and these make credible the interpretation of the burial 103 fabric as a possible garment. For example, Phillips and Brown (1978: Plate 20) illustrate fragments of a Spiro engraved shell cup that depicts male human figures wearing tunics that cover one shoulder and a portion of the chest. One of a group of six human figures engraved on the Rocky Creek limestone slab (Parker 1949:Figure 2) is shown wearing a cloak-like garment that covers the shoulders, one arm, all but the lower part of the other arm, and the entire torso.”
(A Most Indispensable Art: Native Fiber Industries from Eastern North America
By James B. Petersen)

“Equivocal representations of garments over the upper body include two almost identical shell gorgets from Mound C at Etowah, one of which came from the 1884 BAE excavations (Thomas 1894:Figure 190), and the other (unpublished) from burial 19 excavated in 1954 by Larson. The dual human figures have the upper body and arms covered with parallel lines that may represent a garment…”
(A Most Indispensable Art: Native Fiber Industries from Eastern North America, by James B. Petersen)

“The elite nature of the fabric evidence and the burial context warrants such in inference here. Mound C apparently supported a mortuary temple which, in turn served as the focus of an elaborate complex of funerary rituals associated with a high status social group at Etowah.”
(Larson 1971)
Posted by dave mack at 5:12 PM