X2a’j is not found in North America but its importance to Native American DNA is virtually unknown. It’s the 5-ton elephant in the room that researcher’s geneticist do not want to talk about. Outside of the American continent it’s the most closely related genetic link to a founding Native American genetic dna marker and the only place  outside of North America you can find X2a. X2a’j is found in Iran. One would expect that if current theories about world migration and dna dating are correct the closest genetic links to Native American Haplo group x2a would be in Siberia, East and central Asia. Native American haplo group x2a DNA marker is not found in these countries its found only in the Middle East specifically Iran. Current theory is that people from the middle east migrated  to subarctic Siberia then to North America. As already stated Haplo group x as related to North American Native Americans is not found in Siberia or East and central Asia. The idea that people from the Middle East, in temperate climate would migrate to subarctic inhospitable wastelands is nonsensical.

Scientist show that Israel is the place that haplo group x spread from. (ie matches Book of Mormon and Bible record).

(Galilee Druze individuals represent the refugium of an ancestral group with high diversity and high frequency of haplogroup X, which was more prevalent in the region in antiquity, and from which the global diversity of X mtDNA haplogroup emerged)


The tribe of Manasseh which Lehi and Nephi are members of are invaded by the Assyrians and defeated and half of the tribe of Manasseh are deported.(2 Kings 17:6, 1Chronicles 5:26). In the final deportations of Manasseh, Sargon the II deports the northern tribes of Israel to the Assyrian empire which included Media known today as the northwest part of Iran. The Median tribes in 678BC made the first empire of Iran. With these deportations it’s also believed the dispersion of the lost ten tribes of Israel to the north begins.

2 Chronicles 30:1-11 explains that the Tribe of Manasseh was invited back to Jerusalem to worship back at the temple. 2 Kings 17:34 states that they no longer worshipped the God of Israel, most likely influenced by the Assyrian culture and beliefs provided by the Assyrians. Lehi ancestors very well could have been some of those invited back to Jerusalem and reconverted back to their ancestral hebrew beliefs. Those who rebelled against Nephi such as Laman, Lemuel and the sons of Ishmael probably reverted back to pagan beliefs of Assyrian origin when they arrived in the promise land. 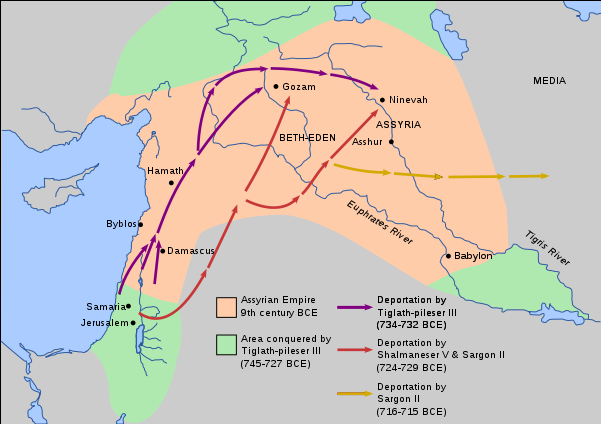 As to why this is the most concise dna evidence for the Book of Mormon is two fold. There are cultural and dna findings that match the Book of Mormon and Old testament. The dna and scriptural narrative is nothing without the cultural evidence displayed by Native American culture. I believe not only did Lehi bring Hebrew like culture but Laman and Lemuel or possibly the Mulekites brought over Assyrian pagan beliefs. The Nez Pierce Indians have the most concrete examples of Assyrian culture. The Mik Mak Indians have the best examples of Hebrew culture.

Ancient Mesopotamian Cuneiform tablets were found on Chief Joseph. Cuneiform dates back thousands of years to Mesopotamia, to what is now modern day Iraq. Assyrians also used a form of cuneiform. When Chief Joseph was asked where he got the tablets he said he received them from his forefathers.  The tablets were translated to read "Nalu received 1 lamb from Abbashaga on the 11th day of the month of the festival An, in the year Enmahgalanna was installed as high priestess of Nanna". 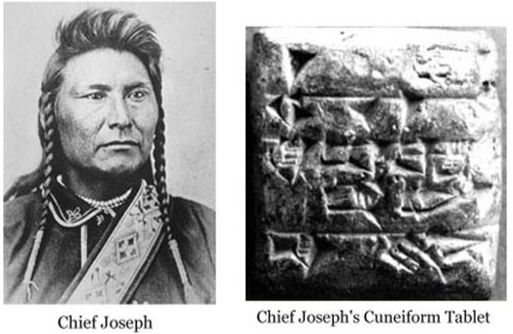 This is an ancient Assyrian relief sculpture. The Assyrian God Asher sits on his throne. In front of him is a four-pointed star with a circle in the center. Radiating out from between the four points of the star are rays of light. The rays of light radiate out in three ribbons: 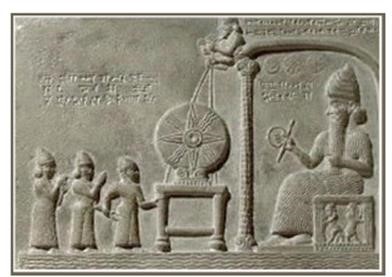 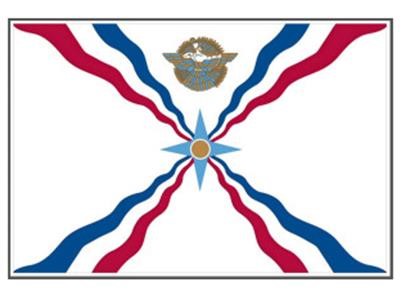 Chief Joseph not only had Cuneiform tablets but his medicine bag has what appears to have the Assyrian Star of Ashur. The star in the middle has four points and what would be the three ribbons of light coming from the star. 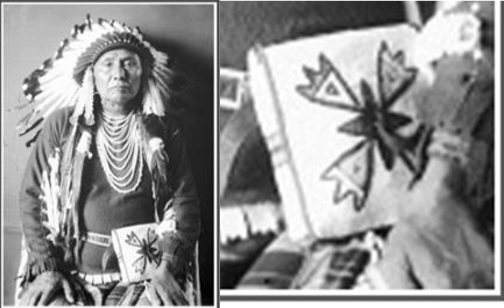 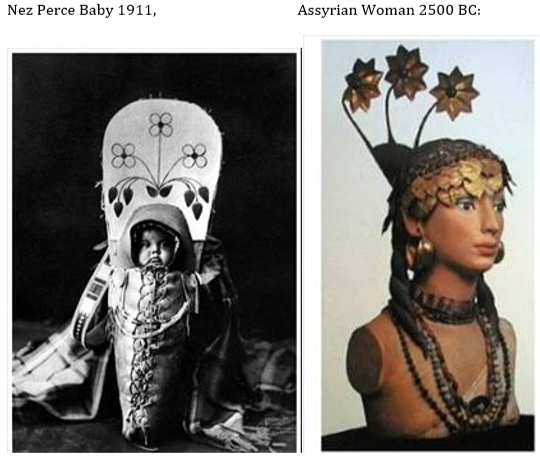 “We surveyed our Old World haplogroup X mtDNAs for the five diagnostic X2a mutations (table 2) and found a match only for the transition at np 12397 in a Nannagle X2* sequence from Iran. In a parsimony tree, this Iranian mtDNA would share a common ancestor with the Native American clade.”
(Origin and Diffusion of mtDNA haplogroup X, http://www.ncbi.nlm.nih.gov/pmc/articles/PMC1180497/)

NP 12397 is X2A’J. DNA proof explaining the mystery of Nez Pierce Indians having Assyrian culture is iron clad evidence in my unprofessional opinion. That Assyrian culture to include other old world culture thrived among North American Native Americans.
People have tried to explain away chief Joseph having cuneiform tablets with seemingly impossible explanations. But to try and explain the cultural, cuneiform tablets and supporting dna evidence will take a supreme effort of mental gymnastics.

Much like the mental gymnastics of calling a horse a tapir and other examples Mesoamerican apologetics were laughed to scorn for their hope in the most unlikeliest circumstances. Researches best bet at this point is to continue to ignore the DNA evidence and hope like Book of Mormon Mesoamerican apologist that dna evidence in their favor will arise.

I originally found this theory quite speculative. It was solely based on the lack crescent based artifacts found at Hopewell sites. Crescent shaped artifacts were found in plenty on non-Hopewell sites just the opposite was found with Hopewell sites. Archeologist were surprised by this finding. The reasoning behind this is the Hopewell who I believe are the Nephites would not worship pagan Assyrian Gods while Laman and Lemuel and there posterity would.

“If the tabulation is valid, it indicated that statistically there should have been found at least one copper crescent at Hopewell.”

The theory was quite speculative until I found what was directly translated from Chief Joseph tablet.  His tablet directly mentions the Assyrian crescent mood god Nanna. It states “Nalu received 1 lamb from Abbashaga on the 11th day of the month of the festival An, in the year Enmahgalanna was installed as high priestess of Nanna”. It is quite possible the crescent shaped ornament that was worn by Native Americans is the Assyrian god Nanna. It must also be stated that Sargon the I worshipped Nanna, her daughters were made priestess over Nanna. Sargon the II who deported the tribe of Manasseh also worshipped Nanna. The worship of Nanna did not come out of play until 550BC.

Assyrian Relief to include sun and crescent moon and the worship there of: 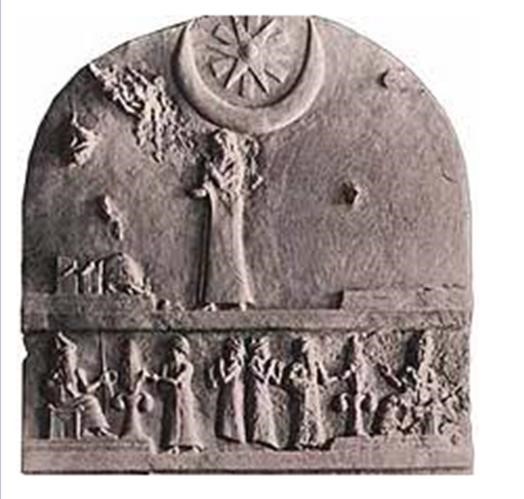 King Melishipak I (1186–1172 B.C.E.) presents his daughter. The crescent moon represents Nanna, while the sun and star represent Shamash and Ishtar: 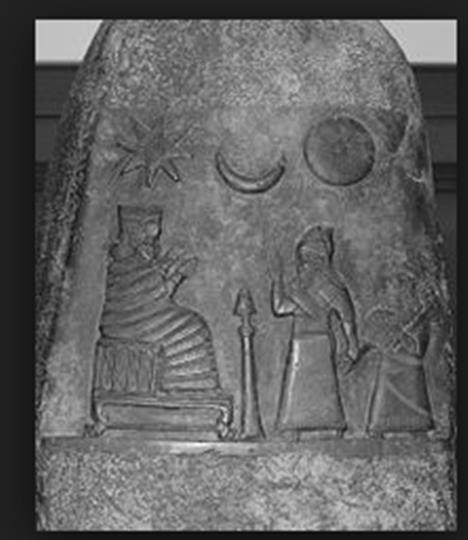 Once again the crescent moon god Nanna, is represented: 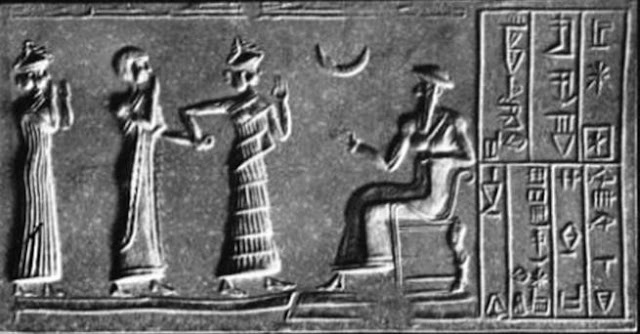 Horizontal, face up, head southeast; shell beads around the neck, a hook or crescent shaped piece of copper on the breast.
(Cyrus Thomas)

The two crescent-shaped pieces are entirely plain, except some slightly impressed lines on the portion connecting them with the central stem.
(Cyrus Thomas) 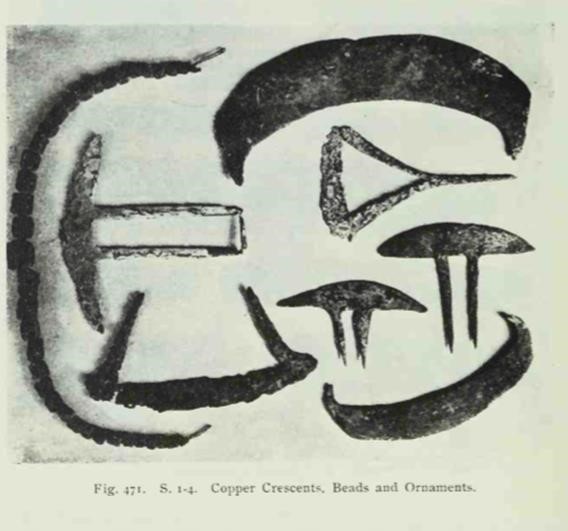 Near the original surface, some 10 or 12 feet from the center, on the lower side, was discovered, lying at full length on its back, an unusually large skeleton….With it were three thin, crescent-shaped pieces of roughly-hammered native copper, respectively 6, 8, and 10 inches in length, with some small holes along the convex margin.
(Cyrus Thomas)

In this painting a Seminole Indian is wearing three crescent shaped objects: 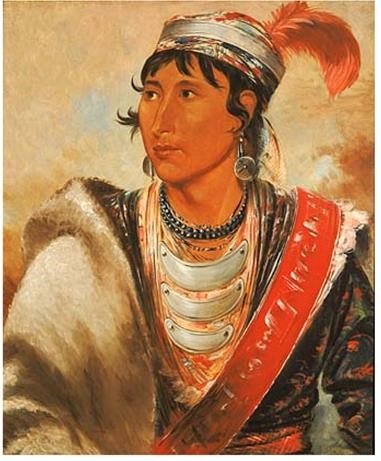 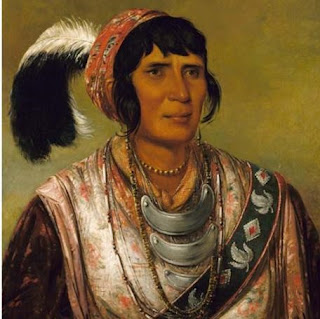 Seminole Os-ce-o-lá, the Black Drink, a Warrior of Great Distinction, 1838 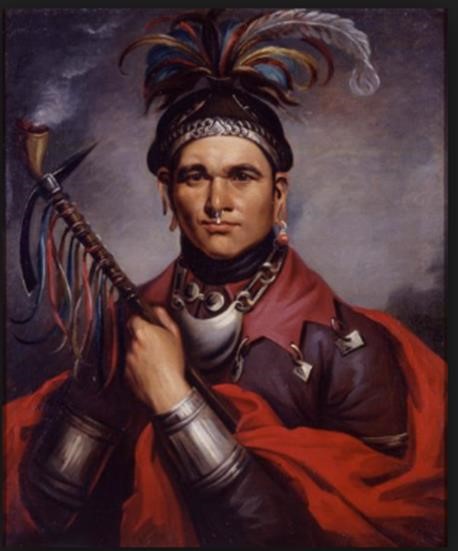 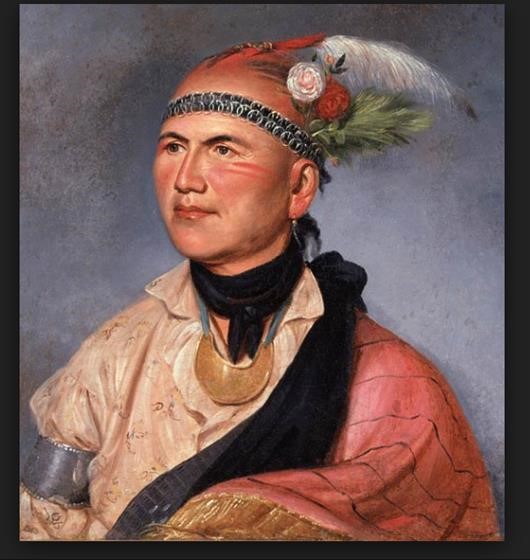 Scientist believe that Haplo Group x arrived in North America around 15000BC that obviously would have no tie to the Book of Mormon. But if One believes that mankind began with Adam and Even then 15000BC dating is incorrect. To believe that haplo group x arrived on the American continent in 15000BC a person would also have to believe that humans evolved from pond scum and cockroaches.