The Nephites were under constant attack from the Lamanite particularly by the West Sea. To fortify against these attacks a fortified line needed to be built


The fortified line described in the Book of Helaman is near Bountiful and extended from the West Sea going east. I believe the following account is archeological evidence of this fortified line. The Book of Mormon and historical account describes it in a southeast direction. Generally speaking the Nephites had this line extend from Lake Michigan shoreline going east. It veered toward a south east direction. Compare the Book of Mormon account with the historical account. 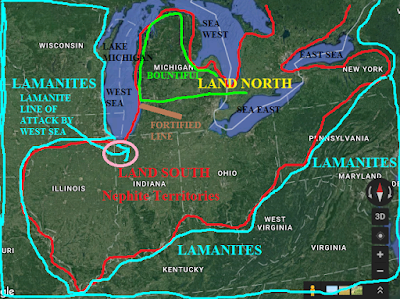 7 And there they did fortify against the Lamanites, from the west sea(LAKE MICHIGAN), even unto the east; it being a day’s journey for a Nephite, on the line which they had fortified and stationed their armies to defend their north country.


An example of the Lamanites attacking from the south of the west sea is shown in Alma 53:8. For a better understanding of that chapter see mapped Alma chapter 53 link .


8 And now it came to pass that the armies of the Lamanites, on the west sea(Lake Michigan), south, while in the absence of Moroni on account of some intrigue amongst the Nephites, which caused dissensions amongst them, had gained some ground over the Nephites, yea, insomuch that they had obtained possession of a number of their cities in that part of the land.


“Remains of fortifications also exist in Michigan as the following account taken from the Buffalo Pilot reveals: “...in the town adjoining Cooper, county of Megan, Michigan, about a mile distant from the fertile banks of the Kalamazoo, is a small hamlet, commonly known as Arnold’s Station. The first settlers of this little place, emigrants from the St. Joseph country, found In the township some extensive ruins of what had evidently been the work of human ingenuity, and which they christened the Military Post. “It consists,” says the writer, “of a wall of earth, running north west and southeast, being about the height of a man’s head In the principal part of Its length, but varying in some places, as if It had been degraded, either by the hands of assailants or the lapse of time... .“

If the neighboring Indians are questioned upon its traditional history, the invariable answer is, that it was there when they came-- more, they either do not or can not say. That It was the labor of an extinct race is pretty evident, and it probably dates from the same era with the extensive works at Rock River. These latter are, however, of brick, a specimen of which material, taken from beneath the roots of an oak tree of great size, the writer has in his possession. (Quoted in Times and Seasons, Vol. 6, p. 906.”


My understanding is the fortified line no longer exist being destroyed by settlers during the establishment of the city of Kalamazoo.
The fortified line on the map is not drawn to scale. Kalamazoo is approximately 30 miles from the Michigan Lake shoreline


(Glenn Chapman helped in the compilation of sources)
Posted by dave mack at 11:16 AM